skip to main | skip to sidebar

Official: Sonar may have detected wreckage from AirAsia Flight QZ8501

Indonesian searchers battled bad weather Wednesday in their efforts to find more remains from AirAsia Flight QZ8501, a day after the first signs of debris were spotted.

There was conflicting information about whether any parts of the plane had been located underwater. 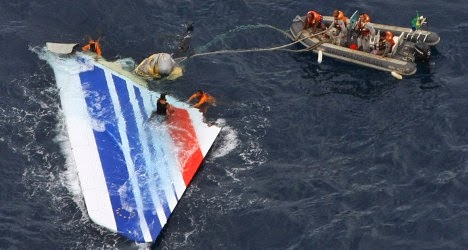 One search official told CNN that he believes sonar equipment has detected wreckage from the plane at the bottom of the sea.

"I think that that's the case," said Muhammad Hernanto, the head of search and rescue for the city of Surabaya, where Flight 8501 began its journey on Sunday. He was dialing back earlier comments he made to CNN in which he said the sonar equipment had located wreckage from the plane.

Indonesia's national search and rescue chief said the body of the aircraft hasn't yet been discovered.

"Until now, we haven't found the plane," Bambang Soelistyo said, according to Indonesia's national news agency Antara. "We've only found seven bodies to this day."

The grim discovery Tuesday of parts of the missing plane and several bodies on the surface of the sea dealt a heartbreaking blow to families whose loved ones were lost.

Seven bodies -- four men and three women -- have been recovered from the water so far, Soelistyo said. One of the women found was wearing a flight attendant's uniform, he said.

Search teams are looking for other bodies and parts of the plane, including its so-called black boxes. Those could help investigators determine what went wrong on the flight, which lost contact with air traffic controllers on Sunday with 162 people aboard.

Sonar equipment has been searching the bottom of the sea, tens of meters below the water's surface, according to SB Supriyadi, the search agency's director of operations.

Dozens of ambulances were lined up in the Indonesian city of Surabaya, ready to carry any bodies recovered.

As families watched a live news conference Tuesday about the discovery of the debris and saw video of a helicopter lowering a diver to what appeared to be a floating body, some people fainted.

Stretchers were brought into the room.

Family members burst into tears, dabbing their eyes as officials passed out tissues. Some sat with their eyes full of tears, hands covering their mouths or heads buried in their hands. Others had phones jammed against their ears.

"Everyone became hysterical, especially the mothers. One mother even blacked out," said Maria Endang Wirasmi, whose daughter, son-in-law and two grandchildren were on the flight.

Her husband, Imam Sampurno, said he was relieved the plane had been found.

"We hope that our children will be saved by a miracle," he said.

AirAsia CEO Tony Fernandes told reporters he hoped there was "at least some closure" for families.

"My heart is filled with sadness for all the families involved in QZ 8501," he tweeted. "On behalf of AirAsia my condolences to all. Words cannot express how sorry I am."

Soelistyo, the head of Indonesia's search and rescue agency, said the debris was discovered when a crew on a military aircraft spotted the shadow of an object that looked like a plane in the water off the coast of Indonesia's Central Kalimantan province on Borneo.

Further searching found floating objects believed to be the bodies of passengers, and then what appeared to be an emergency exit of the plane. Officials sent other search teams racing to the area.

Several nations are contributing resources to the effort, including the United States. The U.S. Navy destroyer USS Sampson arrived Tuesday.

The USS Fort Worth is also being prepared to deploy from Singapore, Pentagon spokesman Rear Adm. John Kirby said. It "can be ready to sail in a day or two to get on station and can be there very quickly," he said.

The United States is also preparing maritime patrol aircraft that could help, he said.

The flight, which was lost Sunday on its way to Singapore, was carrying 155 passengers and seven crew members. The overwhelming majority were Indonesians. There were also citizens of Britain, France, Malaysia, Singapore and South Korea.

Search and rescue teams are diverting all their resources to where the debris is, in the Karimata Strait, about 110 nautical miles southwest of the Indonesian city of Pangkalan Bun, AirAsia said.

Jet in water deep as a 10-story building Is air travel in Asia growing too quickly? Pilot's wife: I hope he will be back

How can a modern airliner vanish?

Fernandes said the focus for now must remain on the recovery effort, and no sweeping changes were planned for the airline, which has 1,000 flights a day. "But rest assured," he said, that once the investigation is done, if "there are things we need to change, that we will change it."

The Airbus A320-200 lost contact with air traffic control early Sunday shortly after the pilot requested permission to turn and climb to a higher altitude because of bad weather, according to Indonesian officials.

Questions remain about why Flight 8501 lost contact with air traffic control and what happened afterward.

Some experts have said the aircraft might have experienced an aerodynamic stall because of a lack of speed or from flying at too sharp an angle to get enough lift.

Analysts have also suggested the pilots might not have been getting information from onboard systems about the plane's position or that rain or hail from thunderstorms in the area could have damaged the engines.
Forskolin Belly Buster Reviews
The key to understanding what happened is likely to be contained in the aircraft's flight recorders.
"Until we get the black boxes, we won't know what's going on with the engines," said Bill Savage, a former pilot with 30 years of experience.
Posted by Echo at 1:04 AM 1 comment:

Welcome to My blog

The Ultimate Winter Checklist for your Hair!

Here’s your ultimate winter beauty checklist that will make sure you have that lustrous mane you’ve been dying for.

The best way to keep your hair shiny and glossy during winters is to switch your regular conditioner to an intense conditioner meant for dry hair. During winter, the natural oils that keep your hair moisturized get sapped easily, and leave your hair dry and frizzy. Giving it that extra moisture is only going to help, so do get it without a second thought.

Winter or not, make sure you always use quality products for your hair and skin. Don’t be lured by new shampoos and conditioners arriving in the market- changing the hair care products you use too often can actually cause damage to your hair. Instead, stick to the products that you know your hair loves, especially if you have dry hair that is more prone to damage and breaks easily.

The benefits of regular trimming are severely underrated. Not only does trimming help keep split ends at bay, but it also helps maintain your hair and keeps it glossy and shiny. In fact, it is also believed that trimming every 6-8 weeks can help improve hair growth and enhances the natural beauty of your hair by getting rid of the damaged hair.

Your scalp health says a lot about your hair health and vice vera, and during winters, make sure you give that little extra pampering to your scalp, which is vulnerable to drying out. Choose from almond oil, argan oil and coconut oil and give yourself a nice head massage atleast once a week. These oils can actually give your scalp and hair roots the nutrients they need to keep your hair shiny and glossy.

Be it summers or winters, one hair care tip you should live by is to use lukewarm water while rinsing your hair. You may love going for a hot water bath during the chilly winters, but it will only leave your hair frizzy and unmanageable. Instead, use hot water for your body bath and choose lukewarm water to wash your hair. Limiting the number of times you have a head bath is also believed to be helpful during winters.